Pneumonia is an acute infection of the lungs that can be caused by bacteria, viruses, fungi, or parasites. About 2 million Americans contract it each year. Up to 70,000 die, making it our most lethal infectious disease. Many types of bacteria cause the disease, but pneumococcus is the most common. Viral pneumonia is often caused by flu viruses, whereas fungal pneumonias are frequently contracted by inhaling dust or air that harbors spores of Coccidioides, Histoplasma, Cryptococcus, Aspergillus, and others. It is uncertain whether Pneumocystis carinii, the organism responsible for AIDS related pneumonia, is a fungus or parasite, but research favors the former. Aspiration pneumonia, in which stomach contents are inhaled into the lungs, can occur after surgery. Regardless of the cause, pneumonia is most serious in young children, the elderly, or anyone whose immunity is low or whose health is poor. Symptoms vary somewhat according to the cause and site of the infection in the lung, but all pneumonias result in breathing problems, such as pain when inhaling and shortness of breath. Coughing may produce thick, greenish or yellow sputum. There may also be a high fever and chills, which come on suddenly. 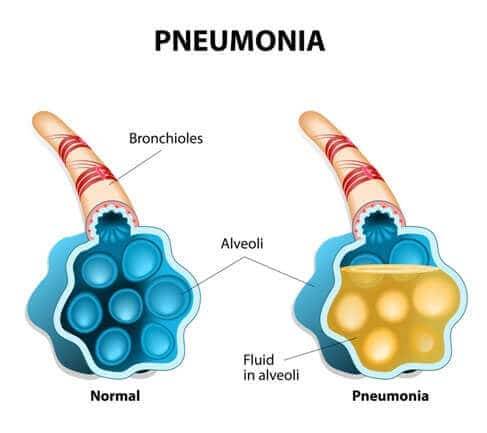 A doctor begins by examining the lungs with a stethoscope to listen for characteristic crackling sounds, or rales, that occur when the patient takes a deep breath. He will also place the fingers of one hand over a rib and thump with a finger of the other hand, listening for a normal, resonant sound. A dull sound may indicate a patch of pneumonia. A chest X-ray and laboratory examination of blood and sputum samples are needed to confirm the diagnosis.

To fight bacterial pneumonia, broad spectrum antibiotics, such as penicillin, a cephalosporin, or erythromycin, are usually prescribed. Pneumocystis pneumonia is treated with trimethoprim sulfamethoxazole and pentamidine. Antifungal drugs are administered to treat pneumonia caused by a fungus. Antiviral drugs, such as amantadine and acyclovir may be given to prevent or shorten the course of viral pneumonia, but this treatment is generally reserved for patients with a chronic disease that increases the risk of complications. Other treatments are aimed at alleviating symptoms; an expectorant, for example, may be prescribed to make the mucus easier to cough up.

In acute cases, a homeopath may prescribe aconitum, to be taken hourly, or the ABC formula every one to two hours. Bacillinum may be taken once but should not be repeated if it has no effect. If pus filled mucus is being coughed up, hepar every three to four hours may be recommended.

Extra vitamin C with bioflavonoids and vitamin A or its precursor, beta carotene, are advocated to hasten recovery, and zinc lozenges to help bring up phlegm. During the acute phase, the diet should be mainly fruits, vegetables. and chicken broth and other clear soups. The patient should abstain from alcohol and caffeine. Any individual being treated with antibiotics should also take acidophilus capsules in order to prevent an overgrowth of yeast.

Bed rest is necessary until any fever disappears, and even then, normal activities must be resumed gradually. Viral pneumonia may require a convalescence of four to six weeks; recovery from other pneumonias varies depending upon the causes. Placing a heating pad on the chest helps to relieve pain, but it should not be left on while sleeping. You can use a coolmist humidifier to increase air moisture. Refrain from taking cough suppressants, especially if you are coughing up sputum, because coughing helps eliminate lung secretions. Practicing postural drainage for 5 to 15 minutes several times a day also helps clear the lungs. To do this, lie face down across a bed with the upper pac of your body hanging over the edge; and then cough up as much sputum:E you can . If some one is available to help you, have him gen tly tap your back to loosen the much.

Other Causes of Lung Symptoms

Flu, bronchitis, emphysema, and various occupational lung disorders are among the many respiratory conditions that produce symptoms similar to those of pneumonia.