Everyone knows they should eat salad regularly but many people make the mistake of not including a variety of vegetables in their salad. They throw in lettuce, some cucumbers and a handful of cherry tomatoes and call the job done even though there are dozens of other vegetables they could include. 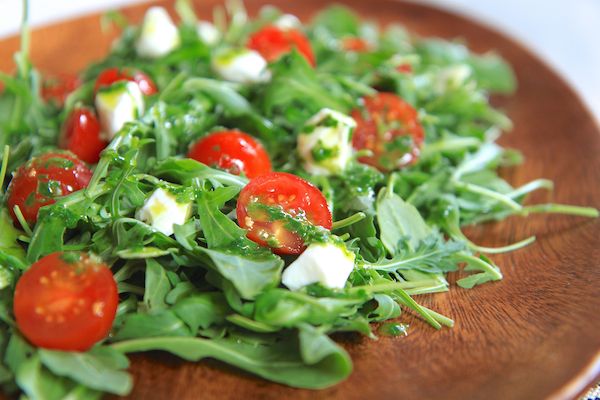 One of the most powerful yet most often ignored vegetables is arugula. In fact, you wouldn’t be remiss to switch lettuce out entirely for arugula, and here’s why:

Cruciferous vegetables (broccoli and cauliflower) have been considered some of the most powerful cancer fighting foods for years. It turns out that arugula actually has the same sulfur-containing compounds in cruciferous vegetables that are thought to prevent cancer. Ongoing research studies are actively looking at whether or not these compounds can also fight existing cancer.

Leafy greens of all kinds have been shown to contain alpha-lipoic acid, an antioxidant which lowers your glucose levels and increase insulin sensitivity in patients with diabetes.

Arugula contains a high concentration of vitamin K. A lack of vitamin K has been linked to increased risk of bone fracture and osteoporosis later in life.

The large amount of vitamin C in arugula can help you boost your immune system.

Along with the vitamin C, arugula contains both beta carotene and vitamin A, which have been shown to help your skin cells repair more quickly, keeping your skin beautiful and preventing cancer.

Like other leafy greens, arugula contains a large amount of water and antioxidants which can flood all the nasty stuff out of your body. Even if you have a healthy diet and lifestyle there are still toxins in the air around you.

100 grams of arugula might contain a large concentration of several nutrients, but it still only has 25 calories. Between the low calorie count and the sheer amount of water contained in this leafy plant your stomach will be quite full after an arugula salad so it’s important, particularly if you’re on a quest to lose weight.

Arugula has both iron and protein, two essential components of healthy, fast growing hair. Other vegetables with protein and iron include broccoli and avocado.

Vitamin K has been shown to help limit neuronal damage in the brain, reducing the risk of conditions like Alzheimer’s.

The protein, iron and vitamins in arugula will give you the energy to do whatever it is you need to accomplish during the day and still have fun later.

Adding more vegetables to your salad is always a good idea, especially if that vegetable happens to be arugula.